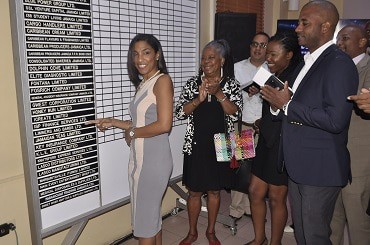 In her welcome, Miss Andrea Kelly, General Manager, Jamaica Central Securities Depository (JCSD) & JCSD Trustee Services Ltd. stated that “as the JSE continues its yearlong 50th Anniversary celebrations, we continue to add to our next 50 years of history, with the listing of The Limners and Bards Limited (The LAB). This is the first advertising agency and film production company to be listed on the JSE, which is further diversifying the types of companies listed on the JSE”.

Miss Kelly further highlighted that the prospectus by The LAB was published on July 10, 2019 with an offer open date of July 17, 2019. The offer opened on July 17, 2019 at 9:00 a.m. and closed on the same day at approximately 4:00 p.m. due to over-subscription.
The Company received 2,507 applications and applicants applied for approximately 866.97 million units valued at $866.97 million. This was approximately 358% more than the company required, as the Company offered 189.14 million units valued at $189.14 million. Including The LAB, the number of securities listed on the Junior Market is now 42 and the total number of companies listed on the JSE is 82, with the total number of securities listed being 117.
As at July 25, 2019, the market capitalization of the Junior Market amounted to $145.5 billion. The market capitalization of The LAB amounted to $945.7 million, therefore the market capitalization of the Junior Market will increase to $146.48 billion and the overall market capitalization will amount to $2.04 trillion as at Friday, July 26, 2019.

In her remarks, Co-founder of LAB, Miss Kimala Bennett, said she was deeply humbled to see her dream became a reality before her eyes. She further stated that she and her Co-founder, Ms. Melissa Llewellyn returned to Jamaica in 2007 with J$20,000 and 11 years later in 2018 their company grew revenues of $483 million dollars and pre-tax profits of $76.5 million dollars. Miss Bennett said that “the advertising and film-making industries in Jamaica are poised to breakthrough in the region and the world and The LAB has the team to tap into some of that market share.”
NCB Capital Markets’ Vice President of Investment Banking, Mr. Herbert Hall, thanked The LAB team for affording NCB Capital Markets the opportunity to be the lead broker for this listing. Mr. Hall stated that the LAB is the first listing on the Junior Market for 2019 by NCB Capital Markets and this was also the first listing to use the NCB Capital Markets GoIPO platform.

Mr. Hall further stated that “the GoIPO platform allows for easy tracking of applications in real-time, quicker processing of refunds to investors and we want this to be the standard operating procedure for our market and as such, we are willing to allow other Brokers to use our GoIPO platform”.