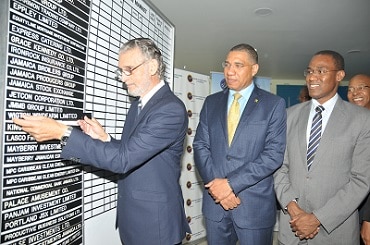 The Most Hon. Andrew Holness Prime Minister, congratulated all the entities that made the listing possible within 21 days after the offer closed. He thanked the investors for the confidence they placed in Wigton. He also thanked the Parliamentarians for their support in divesting a profitable company as he argued divestment was good for Jamaica and Jamaican investors. He stated that he wanted not only for Jamaicans to own assets but to share in the profitability of the company and this was achieved with over 31,000 persons investing in Wigton. This he said was the road to prosperity. He noted also that there are other government assets that will be divested in the short to medium term in the form of shares in JPS and Jamaica Mortgage Bank.

“Words can hardly express the importance and significance of this listing, but I will try.” These words were a part of the opening statement made by Mrs. Marlene Street Forrest, Managing Director JSE, to the large audience which included the Prime Minister, the Most Hon. Andrew Holness, Dr. the Hon. Nigel Clarke MP, Minister of Finance and Public Service and the Hon. Fayval Williams, MP Minister of Science, Energy and Technology who gathered at the JSE to witness the listing of Wigton Windfarm Ltd.

Mrs. Street Forrest highlighted the significance of this listing; “With the exception of Wigton, in respect to recent listings, the largest IPO the JSE has processed was Wisynco Group Limited in which the number of applications processed was 7,769 resulting in a listing 21 days after the close date. We have made tremendous strides as Wigton with total applications of 31,200 and four times the size of that offer has taken 21 days from the close of the offer to listing today.”

Mrs. Street Forrest went on to state that “while the overall number of applications was 31,200, we are pleased to report that 11,772 or 38% are new investors to the market. This represents an increase in the number of account holders in the JCSD of 7.6%.  Over 64% of those who invested were under 50 years of age with approximately 50% under 40 years old.  The gender mix was also quite interesting as more female applied for shares within this IPO that is 56%: 44% female/male ratio. The average spend for new investors was approximately $124,000 with the offer oversubscribed by 158.8%.”

Energy Minister Hon. Fayval Williams, in her remarks stated “Our economy is winning as this IPO was able to generate some $14 billion, when only $5.5 billion was on offer. Other countries are also encouraging their citizens to invest in wind energy. In Denmark, “…the Middelgrunden offshore wind farm – with 20 turbines, the world’s largest offshore farm at the time it was built in 2000 – is 50% owned by the 10,000 investors in the Middelgrunden Wind Turbine Cooperative, and 50% by the municipal utility company.” In closing Minister Williams noted that “Jamaica realizes its energy resource potential through the development of renewable energy sources in accordance with goal 3 of our energy policy.”

Dr. Hon. Nigel Clarke, Minister of Finance and the Public Service, stated that about 30 years ago, the then government under the stewardship of the Most Hon Edward Seaga listed National Commercial Bank Jamaica Limited assisted by Rothchild Investment Bank based in Europe. He commended the development of the financial sector such that this large transaction was efficiently and effectively done using local players.  He further commented on the fact that 30 years after the NCB offer, the government of Jamaica has divested all the shares in Wigton, a first ever for a government divested transaction across the market.

Mayberry Investments Limited CEO Gary Peart in his closing remarks thanked all the teams that made this historic day possible. The government, led by The Most Hon. Andrew Holness for his foresight, the JSE and especially the Jamaica Central Securities Depository for its assistance in enabling the allocation of 31,200 applications within the JSE Rules. He also thanked the team at Mayberry Investments and other brokerage houses for their efficient handling of the transaction and paid special tribute to the investors who participated to make this listing a reality.