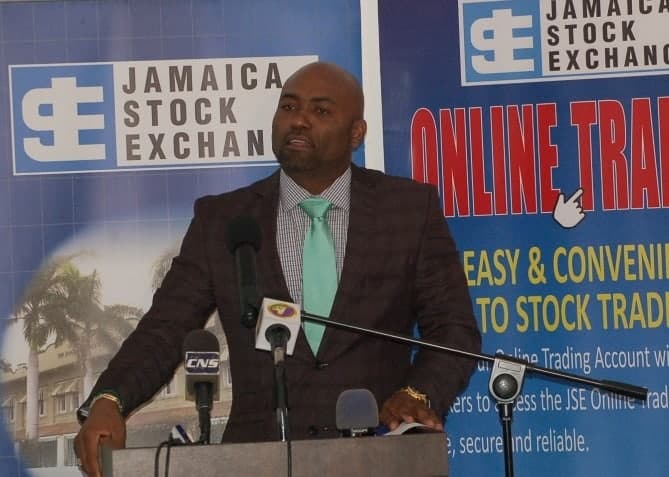 The Jamaica Stock Exchange (JSE) continues to keep a pace with the demand of easy access of market information when the company launched its Mobile App, which is available in the Google Play Store for FREE. 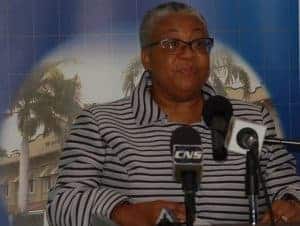 General Manager, Mrs. Marlene Street Forrest in her welcoming remarks traced the technological evolution of the Exchange in stating “the JSE agreed some years ago that if it were to remain relevant and drive the Exchange Group toward efficiency, it was necessary to embrace technology. As a result, in 2000 we moved from operating an Exchange which was primarily manual with trades conducted using an “Open Out-Cry Method” to fully automated trading platform”. Mrs. Forrest continued the journey by stating, “Prior to the electronic trading platform, the decision was taken that in order to mitigate certain risks associated with trading and settlement there was the need for an electronic settlement platform”. The Jamaica Central Securities (JCSD) with electronic settlement software was established in 1998 and began to formalize back office operations.

Mrs. Street Forrest also informed the audience that the training arm of the Exchange, the JSE e-Campus, delivers its courses primarily electronically. She noted that the Exchange was the first company in Jamaica to implement a Hot Site. This website has gone through several upgrades to ensure that it is dynamic. Mrs. Street Forrest added that, “we do this knowing the tremendous reliance the market places on current and accurate information on trading and for companies in which they have invested”. In 2015, responding to the market, the JSE launched its Online Trading Platform which was developed by a Jamaican Company. Today the platform has users from North America and in almost every parish in Jamaica. Mrs. Street Forrest further stated, “Our new website and the development of our mobile app which we are launching today were done by another local firm; Bakari Digital Labs.  In closing, Mrs. Forrest said that, the JSE Mobile Application which took approximately a year to be developed, compliments the other portals we currently use to provide information to you and we are confident that it will drive the number of persons interested in the market and improve the timeliness and capacity of investors in their decision making process”.

Keynote speaker at the launch was Dr. the Hon. Andrew Wheatley. M.P.; Minister of Science, Energy and Technology, who in his opening stated, “The Jamaica Stock Exchange (JSE) is a model of diligence and hard-work; which has led to its performance being recognized by Bloomberg as the #1 performing Stock Market in the world for 2015.  This achievement, which I understand has led to significantly increased interest in our market, is an achievement for all Jamaica, and worthy of celebration. Today’s launch of the JSE Mobile App is not only consistent with the strong brand that the organization has established; it represents vision and foresight and sets the trend for other businesses to emulate”.

Minister Dr. Wheatley highlighted application and business in that, “Customers appreciate companies which make doing business easier. In fact, this was done solely through a website. Today, businesses are recognizing that they need to connect with their customers through multiple channels, including social media, web conferences, and web applications. The infusion of technology in businesses increases both access and growth”.

Minister Wheatley noted that “Jamaica is still considered among those developing and emerging countries that are failing to exploit ICT to drive economic and social transformation. He stated that he believed that the country could do better. In continuing his address, Minister Wheatley stated, “Our administration has signaled our intent to make Jamaica a truly digital society. This means that a greater number of businesses must recognize the importance of building their online presence and virtual exchanges with their clients and potential customers. As a government, we will continue to put in place the necessary regulations and legislative framework for true universal access. We are making data readily and easily accessible. Recently, our Government launched the Jamaica Open Data Portal, which will serve as a one stop shop for all the information in the public sector. This move is already garnering international interest and investment which will help to spur the growth that we want to see in the economy. This is one component of the strategy that is geared towards improving our global positioning. It is our vision for Jamaica to become the hub of all things technological for the region, and with increased partnership we can bring this vision into reality. I encourage more organizations to emulate the JSE’s vision and strategy. I wish the Jamaica Stock Exchange all the best with this mobile app, and I encourage users at home and abroad to utilize this new medium.  May it bring even more good fortune and recognition to the JSE, as you do your part to make Jamaica the place of choice to do business.”

Mrs. Suzette McNaught, IT Manager, took the captive audience through the features of the App and highlighted benefits of using the App as well remaindered the audience that the App is available in the Google Play Store for free. Ms. McNaught also emphasised that the App shows real time market data and company news.

PHOTOGRAPHS OF THE EVENT 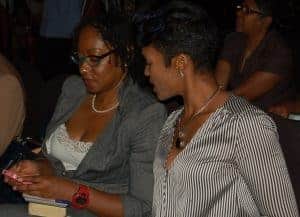 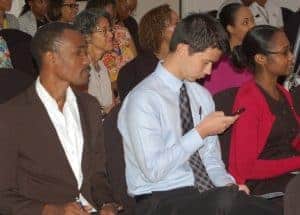 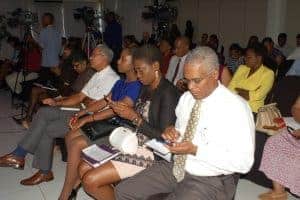 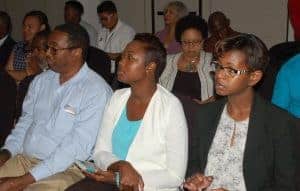