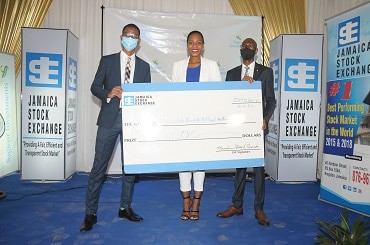 Jamaica’s Financial Sector received a confidence boost from the brilliant analyses of two outstanding market research finalists, who were declared joint winners by the judges of the 2019/20 Jamaica Stock Exchange Market Research Competition. Both evaluations and analyses were on Sagicor Real Estate X Fund Limited’s current performance and prospects beyond COVID-19. The analysts created history as first-time joint winners were declared in the 17th year of the Competition which first started in 2003. The winning analysts are 27-year-old Andre Rumble, Portfolio Officer at Proven Wealth Limited, in Kingston, and 22-year-old Chad Anthony Coke, a final year Business Administration (Finance) student at the Northern Caribbean University (NCU) in Manchester. Mr. Coke created history as the first student to have won this market research competition.

JSE’s Managing Director, Mrs. Marlene Street Forrest, said that she was very heartened by the level of research and discourse that was presented. She stated that these young men have shown that the market has a certain depth of knowledge and analytic skill which will result in improved quality of advice to the growing number of investors that now make up the capital markets.

“Jamaica’s financial markets show great signs of sustainability with these young analysts who are rising to take up the challenge. The future will be in capable hands,” said Mrs. Street Forrest.

“Our ongoing objective is to increase the number of participants in the competition. Here, we have sought to increase awareness of, and generate greater interest, in the Competition. “Chairman of the MRC, Professor Claremont Kirton, told the audience.

“We began by visiting our Universities to explain the details of the competition and attempt to increase the interest of students and their teachers. We need all the support from broker members and those listed companies to become involved as sponsors and supporters of this competition. This will only redound to the continued success of the competition and by extension, the market, since with more analyses made public, investors will be better able to make more informed decisions.
We plan to add another dimension to the Competition by involving analysts from across CARICOM countries. Our Committee has initiated discussions with the Stock Exchanges in CARICOM,” Professor Kirton said.

NCU student, Mr. Chad Anthony Coke, told the audience that the Market Research Competition had given him great exposure and sharpened his analytical and research capabilities. He thanked the JSE, his University and family for their support throughout the Competition. He added that he will continue to do research on the Stock Exchange because it is something that he enjoys.

Portfolio Officer, Mr. Andre Mr. Rumble said that although research is part of his daily work schedule, his effort in the Competition was of note, as he not only had to do research, but also had to present his findings to the public in a convincing manner; something he had not done before, and which required extra preparation. He went on to thank the Stock Exchange for the exposure, his Company, and his family for their support. He said the exposure cemented in his mind the great importance of the work that he does to guide investors in investing their hard-earned capital.

The Market Research Competition was launched in 2003, with its objectives as:

 To increase the interest and involvement of analysts and observers in the Jamaican stock market through in-depth analyses of the performance of listed companies;

 To enhance the research analysis and presentation skills of the entrants, enabling them to better understand the market, improve their communication skills and, in case of broker representatives, to better advice clients;

 To encourage listed companies to improve the content and timeliness of the information provided to shareholders, while encouraging shareholders to become more involved in these companies;

 To emphasize the Jamaica Stock Exchange’s commitment to providing public education on the stock market;

 To stimulate the interest and involvement of the wider public in the stock market.

The winner is determined based on written submission as well as an oral presentation. The written work accounts for 60% of the final assessment, which is graded by nine (9) MRC Committee members. The oral presentations by the analysts, represents 40% of the final grade. Both winners advanced to the Competition’s Face-off and Awards Ceremony, having achieved the highest scores in the intervening four (4) quarterly assessments of the Competition, held over a 12-month period. Mr. Andre Rumble was the 3rd Quarter Winner and Mr. Chad Anthony Coke was the 4th Quarter Winner. Both finalists achieved the same total scores, when the judges’ grades were tallied, creating a historical tie. The JSE awarded each winner with a trophy and cash prize of three hundred thousand (J$300,000.00).