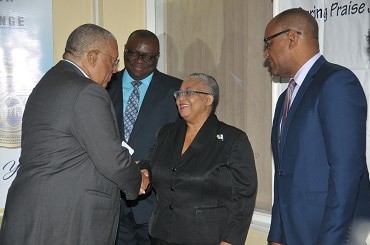 Mrs. Marlene Street Forrest, Managing Director of the JSE in her welcome to the large audience which included Dr. Peter Phillips, Leader of the Opposition; Senator Mark Golding, Opposition Spokesman on Finance; Mr. Mikael Phillips, Opposition Spokesman on Transportation; Senators Damion Crawford and Andre Haughton as well as Mrs. Patricia Duncan-Sutherland – Caretaker, South East Clarendon, to celebrate with us today, our 50th Anniversary. “Our status as the world’s best performing exchange in 2015 and 2018, our recognition by the European CEO as the most innovative Exchange in 2018/19 and on recently receiving out of Canada, the Jackie Robinson Fortitude Award for 50 years of Excellence.”

(a) Signaling to the market that there is a growing recognition by government of the importance of the Jamaica Stock Exchange in spurring growth and development in the economy.
(b) Sharing some of our plans for 2019 and beyond to grow the Exchange and achieve greater participation by government, investors, member dealers and companies.
(c) Signaling that the market is open for business.

Mrs. Street Forrest took the opportunity to inform the audience and media that the Exchange Group is pursuing several new initiatives that she believes will attract more investors to the market; initiatives such as Digital Asset Market, The Green Bond Market, Direct Market Access into the Canadian Market and the Jamaica Social Stock Exchange.

Senator Mark Golding, Opposition Spokesman on Finance and Planning in his remarks congratulated the JSE on reaching 50 years and Mrs. Street Forrest, Managing Director of the Stock Exchange for her exemplary leadership over the years. He further stated that he was proud how the Exchange had grown over the years with the addition of the Jamaica Central Securities Depository, which he said was the key to the expansion of the market. As with this addition the Stock Market is able to operate smoothly. He went on to state that the Depository Service unit was a great addition to the Company and has become the ‘Depository of Choice’ when companies are planning to list. He concluded that for the growth of the country the Stock Exchange was the key in unlocking capital for the country and assist the country to develop.
Dr. Peter Phillips applauded the JSE on the achievements, that is, being the number one performing Stock Exchange in the world in 2015 and in 2018. He stated that the People’s National Party sees the Stock Exchange as a key partner in any policy they would pursue once they formed the next government. He looked at several key areas chief among these was the establishment of the micro market. Dr. Phillips stated that the small businesses were the key to grow any economy and of such they needed special assistance to be able to do so. He cited the lack of capital and proper structure. He stated that the Stock Exchange was the key to providing capital for these businesses.  He further stated that he was especially delighted with the creation of the Jamaica Social Stock Exchange as he saw it as a very good vehicle for inner-city renewal and a good tool to drive employment in these areas. He congratulated the Stock Exchange in facilitating such a move, where persons globally and especially Diasporans can now contribute further to the growth and development of the country.