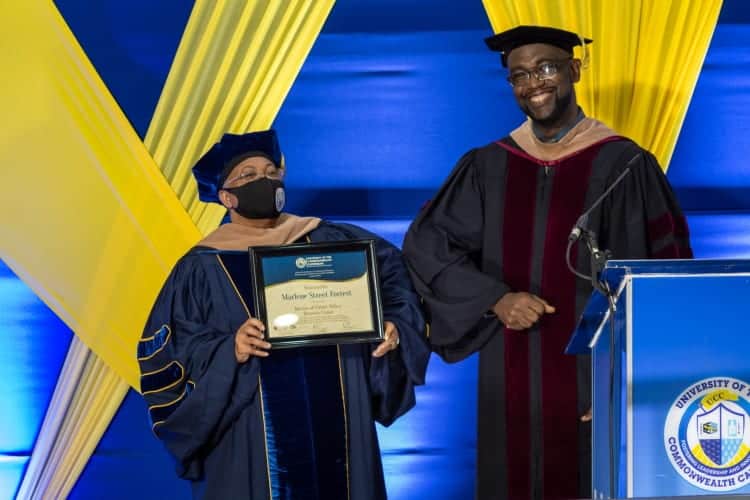 Marlene J. Street Forrest, CD, JP, is an exemplary leader who has blazed a trail of firsts and extraordinary achievements for Jamaica in the complex and intricate world of stock market exchanges.

This proud native of Port Antonio serves as Managing Director of the Jamaica Stock Exchange (JSE) guiding the realization of its vision of facilitating growth and development of the company and the Jamaican economy by allowing for the mobilization, exchange and expansion of capital, while providing a return on equity that is acceptable to shareholders.

Under her stewardship the JSE became demutualized and the US denominated market and Junior Market launched.  She has also spearheaded the Registrar Division of the Jamaica Central Depository where she served as General Manager for this subsidiary of the JSE.

Today, the JSE is one of the largest stock exchanges in the Caribbean both in size and market capitalization.  It is also one of the most diverse exchanges in the region encompassing sectors like banking and finance, retail, manufacturing, insurance, leisure, communications, conglomerates, services and real estate.

It has been a journey of phenomenal achievements by any measure and all the more remarkable for the Jamaica Stock Exchange –proving conclusively that WI LIKKLE BUT WI TALLAWAH indeed!

Mrs. Street Forrest’s prowess in financial management has brought her honour in her home country too.  In 2016 she was conferred with the Order of Distinction in the rank of Commander Class in recognition of her outstanding leadership in the growth of the JSE.

In 2017 she was celebrated by the Institute for Gender & Development Studies of The University of the West Indies as a woman pioneer and in 2018 she received the Rotary Club of Kingston East & Port Royal Vocational Services Award.

It is evident to all that an efficiently functioning stock market is critical to economic development providing capital to companies that can be used to fund their expansion and give investors an opportunity to share profits of publicly traded companies.  Marlene Street Forrest has positioned the JSE in the conversation among much older world leaders like the London Stock Exchange and the New York Stock Exchange.

She has excelled in what has traditionally been regarded as a man’s world winning respect not only for herself but serving as an inspiration for all women for blazing a trail of excellence internationally in the securities markets and financial services industry.

Still, balancing all of her professional commitments, she makes time to serve as a volunteer and to give community service as a Justice of the Peace and a Director of the Good Samaritan Inn – working for the upliftment of the poor and marginalized.

The University of the Commonwealth Caribbean (UCC) is proud to present Mrs. Marlene Street Forrest, CD, JP, phenomenal leader, wife and mother with the Honorary Doctoral Degree in Public Policy.