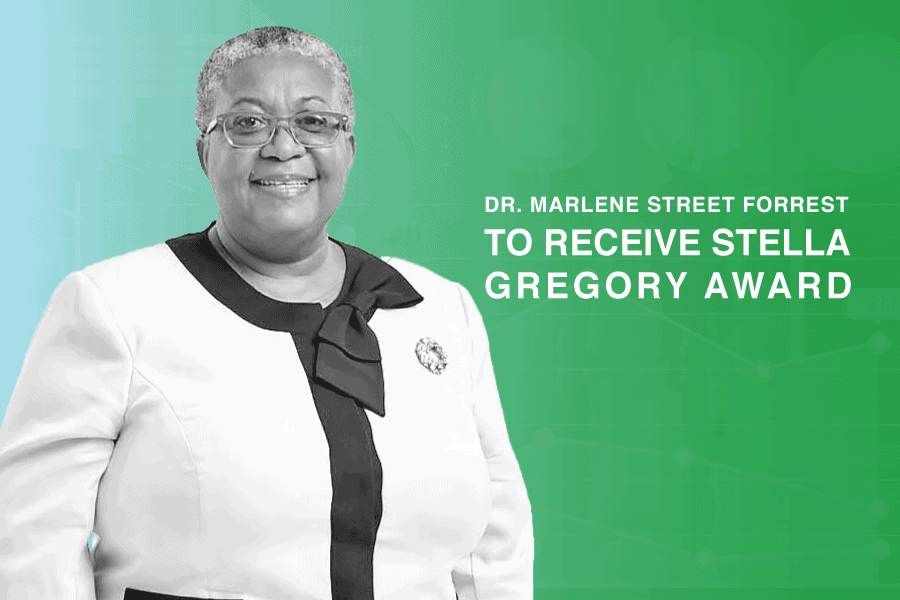 The Soroptimist International Club of Jamaica (Kingston) has named managing director of the Jamaica Stock Exchange (JSE) and director of both its subsidiaries, Dr Marlene Street Forrest, as the 2021 recipient of its Stella Gregory Award. The award is presented annually to an outstanding woman, who has excelled in her chosen field and has contributed to national development. Street Forrest is being recognised for her outstanding record and pioneering work in the securities markets and financial services industry.

The award will be presented virtually during the club’s 59th Anniversary Charter Event and Stella Gregory Awards Ceremony to be held on Wednesday, December 8, beginning at 5:30 p.m.

Soroptimist International is a global volunteer movement for women in business, management and the professions, who work together to transform the lives of women and girls. The Stella Gregory Award was inaugurated in 1976 to honour the club’s founder, Stella Gregory, who introduced Soroptimist International as the first service club for business and professional women in Jamaica.

Dr. Street Forrest has a wealth of experience, having worked in senior management positions at varying private and public-sector organisations here in Jamaica and overseas. Under her stewardship, the JSE became demutualised and the US Denominated Market and the Junior Market were launched. She also spearheaded the Registrar Division of the Jamaica Central Depository when she served as general manager for this subsidiary of the JSE.

Dr. Street Forrest holds a bachelor’s degree in management studies from The University of the West Indies, Mona, and later gained her Master’s in Business Administration at the Barry University in Florida.

In 2016, she was conferred with the honour of the Order of Distinction in the Rank of Commander (CD) in recognition of her outstanding leadership in the growth of the Jamaica Stock Exchange. In that same year, she also received the Afroglobal Excellence Award for Global Impact from Canada for exhibiting great leadership, vision, integrity and commitment to excellence.

She was an Observer Business Leader Nominee in 2017 and was also celebrated by the Institute for Gender and Development Studies – UWI, as a Woman Pioneer. In 2018, she received the Rotary Club of Kingston East and Port Royal Vocational Services Award and was recently recognised by the Alex Ihama School of Greatness as the Business Leader of the Decade.

The University of the Commonwealth Caribbean conferred Street Forrest with an Honorary Doctoral Degree in Public Policy on July 18 for her contribution to nation-building.

She is a justice of the peace and serves as a director for the Good Samaritan Inn, a Christian outreach aimed at uplifting the poor and marginalised.

Invitation to the 2nd Caribbean ESG and Climate Financing Summit