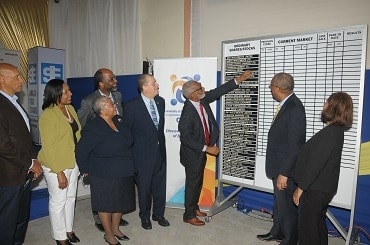 History was created today as C&WJ Co-operative Credit Union Limited listed its 450 million units of Series A – 7.35% Variable Rate JMD Deferred Shares on the Main Market of the Board of the Jamaica Stock Exchange (JSE). For the first time in the history of the Jamaica Stock Exchange a security is being listed of an organization that is not issued by a company which is not incorporated under the Companies Act of Jamaica or in another approved jurisdiction.

Mrs. Marlene Street Forrest, Managing Director of the JSE, commenting on CWJ listing stated, “I wish to again congratulate CWJ Corporative Credit Union as a trailblazer and I expect that soon we will see many more Credit Unions providing access to those who may not be members but want to participate by way of deferred shares. This will also increase capital that is so important to small business and individuals and further democratize and build the investment eco-system. This listing is also like a breath of fresh air to us as our last, that is, the Trans Jamaican Highway came on the cusp of world events especially COVID-19, which has triggered economies large and small to react by selling down – at reduced price securities listed on many stock exchanges. The Jamaica Stock Exchange sees this listing today by Introduction as a green shoot and a signal that commerce is resuming and moving in the right direction.”

“Today is an historic day for the Community and Workers of Jamaica Co-operative Credit Union Limited, which is the first Credit Union on the island to list on the Jamaica Stock Exchange. It is even more significant, as we are privileged to partner with the JSE, which has the enviable position as being one of the best performing Stock Exchanges in the world for the past three years! For the JSE, this is almost routine or a small thing. However, to us C&WJCCUL being listed on the JSE is a giant step forward in bringing C&WJCCUL – and indeed the Credit Union movement – into the 21st century financial world. The listing of the C&WJCCUL deferred shares will enhance our image and ability to continue to support its members, those hard-working Jamaicans, who would otherwise find it difficult to access financial services, stated Mr. Carlton Barclay, CEO, C&WJCCUL.

The Hon. Earl Jarrett, said the Credit Union which came to Jamaica in 1939 is doing a very good job in helping ordinary people gain access to capital which they would not otherwise have. The Credit Union provides an umbrella in times of need and this was such an essential service for ordinary Jamaicans who would have otherwise been left out. For Credit Unions to be listed now to be listed on an Exchange opening another avenue of capital, this constitute a giant leap for growth. This is no mean feat.

Mr. Errol Gallimore opined that the Credit Unions are sleeping giants as they have over J$98 Billion under management, that can be unleashed for the growth and development of the Movement. He continued his discourse and said, the future looks bright as there are fifteen Credit Unions of the 25 Registered Credit Unions that hold deferred shares and may be able in the future, to be listed on an Exchange, therefore the Stock Exchange should be seeing a few more listings in the future. Working together has resulted in our listing of C&WJ Credit Union today and it is very important to see that when we work together what can be achieved.

Mr. Allan Lewis, Managing Director, JN Fund Managers said, “we are very thankful that C&WJ allowed the JN Fund Managers to take them to market and today, many days of hard work have paid off and have led to this significant milestone.”